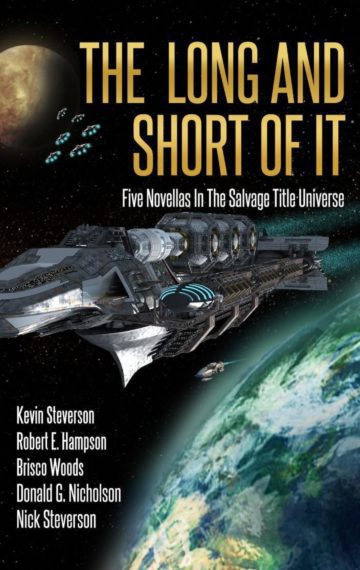 Harmon Tomeral and his friends have beaten the odds, time and again, to establish Salvage System as a beacon of hope, and it is seen as an inspiration for how races can coexist and govern themselves. The members of Salvage System have also been instrumental in helping other systems defend themselves and throw off oppressive regimes.

But the galaxy is a big place, and many of the races in it aren’t friendly. Would these forces like to take over Salvage System and acquire its resources? Absolutely.

Many tales of adventure can’t be contained in a short story, though, like the birth of Earth as an interstellar nation or what happens when two forces scavenge the same boneyard; sometimes it takes more. This book contains five novellas that expand the Salvage Title Universe and give glimpses of where it was thousands of years ago…and where it will be soon.

All of the stories are from veteran Salvage Title authors who know where the universe is going and who are actively crafting its journey. From a dragon searching for honor to the creation of a mercenary force for good, all of these stories offer additional insights into the Salvage Title Universe. Strap in and get ready, because here’s the long and short of it…